Crash at NYC: A horse carriage crash at the back of a BMW

In New York City, an accident happened at the intersection of 55th Street and Eighth Avenue. A horse-drawn carriage and a BMW collided. This stunned the individuals who were present at the time. 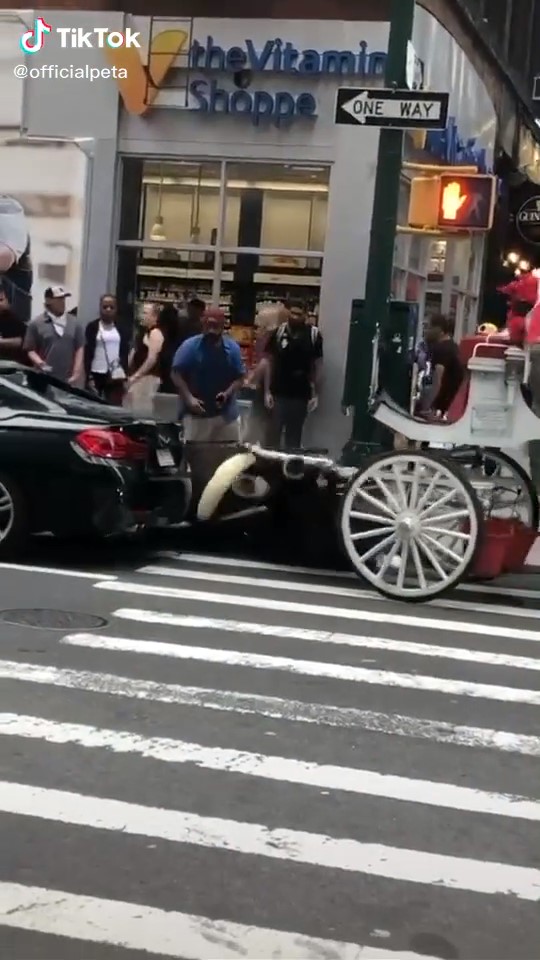 A horse-drawn cart collided with a BMW vehicle. This has resulted in the horse’s fall. A few individuals attempted to assist in lifting the horse, which was terrified and damaged in its legs. The others opened they camera and started recording.

The end of the story:

The horse attempted to stand, but the cart that was connected to it made this impossible. This also resulted in the horse’s harm as he tried to get up afraid and kicked on the walkways.
The horse is able to stand up with the assistance of some individuals, who have also relaxed the animal. They dismantled the cart that was attached to the horse and promptly brought the horse to the vet, who also treated the wounds.

The reaction of the public:

The video has gone viral on social media. On Facebook, Instagram, and Tik Tok, for example. While some users on these networks have started campaigns to prohibit horse-drawn carriages from popular city streets.

And NYC police have received a note from the executive of the right animals group.
“NYCLASS is calling on the New York City Council to expedite legislation to permanently remove carriage horses from city streets, as nearly every other major city in the world has done.”

We also believe that horse-drawn carriages should be subject to stronger regulations in heavily populated cities. Even while there were no significant injuries or losses in human life or animal life this time, if this trend continues, it will not be as fortunate. Perhaps the next time, people’s lives will be at stake. Perhaps Horse Life will be engaged as well. But, before that can happen, we must put a halt to these acts on the streets of major cities.

@officialpetaA horse is left with a bloody injury after colliding with a car in #NYC. This is why horse carriages need to be banned. Link in bio for the story.♬ Sad Scene BGM Piano Instrument(313618) – HomeMadeGarbage