Nothing compares to the magical time during Christmas when all the people gather together with their family and share adorable moments whilst also not forgetting to give gifts to each other. It is a wonderful time for kids, who impatiently wait for Santa to give them the gifts they have previously asked for. An amazing story happened last Christmas when an ex horse owner, named Beth was scrolling through her Facebook feed and suddenly a message popped up from a friend asking her if the horse shown in the video was the horse she has owned many years ago. She had sold him in 1998 when he was 13, so of course, it couldn’t be him because now he would have been 32. 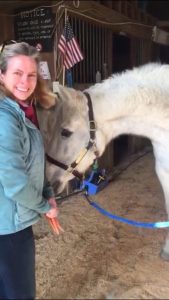 And besides that, Beth watched carefully the way he moved his tail, his small head, sculpted fine even for a Thoroughbred. It was like time had stopped. She scrolled through the facebook page and discovered an amazing surprise, this horse was the same one—he shared her birthday and in a Facebook post, she’d made in a Thoroughbred group, she had also tagged his Jockey Club name Brother Leo, which she had previously used when showing him. His eye orb swelled now, and he had a small hole to his back, but he was in great health, clearly cherished by his owner, his energy and his attitude took the owner back in time. She had been frantically trying to determine where he lived now and fortunately, the owner answered her messages and found that although she’d bought him in Massachusetts, he’d been living most of the time in Maryland, very close to her home. 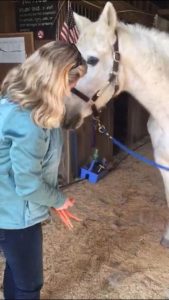 So, the day after Christmas, she decided to go see her old love and was shaking as she neared the aisle of the barn, where he was standing beside his owner. She’d assumed that he’d been dead for years, and yet here she was touching him.  Somehow, miraculously, he’d ended up in a place where he was cherished, where, at the age of 32 he had more supplements than she could count and an array of special feeds he could chew. It was truly a touching moment for both of them. He’d seen her through breakups and losses, throughout some of her happiest times and through a few years of learning how to adult. 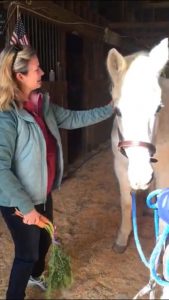 As she was feeding him bags of carrots, it was like time hadn’t passed at all. She turned back in time and felt like she was young again, a million memories and thoughts running through her head. “Had I been good enough to him, taking him as far as he’d go in eventing and then selling him when he seemed unable to hold up to it? Losing track of him and fearing the worst had affected how I’d managed every horse I’d had since, and learning that he’d landed in a perfect place was one of the greatest gifts I’ve ever gotten. For all the people and animals we lose in life, we might think sometimes of what we’d say if we were to see them again, but that time never comes. 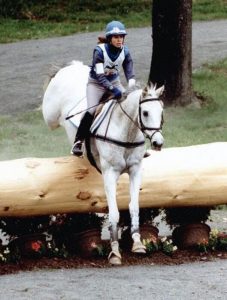 Wherever life had taken us, we were both changed by the time we’d had together, the challenges we’d taken on, and I felt a special connection and gratitude to him still”, she wrote. Less than two months later, his owner texted Beth again saying that although she had tried everything, an issue that she’d been trying to manage had become too hard, and after a lot of attempts, it was time to let Leo go. Beth considered the difficult situation in her mind and decided it was best if she didn’t say the last goodbye to him because the owner of the horse needed to say the final goodbye to him. She then sent a message saying that the beautiful horse had peacefully passed away and the two women saluted each other and remembered the beautiful times they had shared with the special horse. 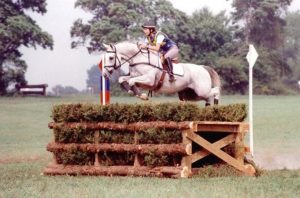 “The experience came and went in such an amazing whirlwind that it felt like a dream, an unlikely second chance, a hint that maybe the unexpected is not always beyond the realm of possibility. You could say it’s one of the bonuses of social media, but to me, it felt like a true Christmas miracle”- said Beth. This was one of the most touching stories we had read and shared at our site and it would mean a lot if you shared it too. We all hope that Leo is in a better place now!

Source: The Chronicle of the Horse